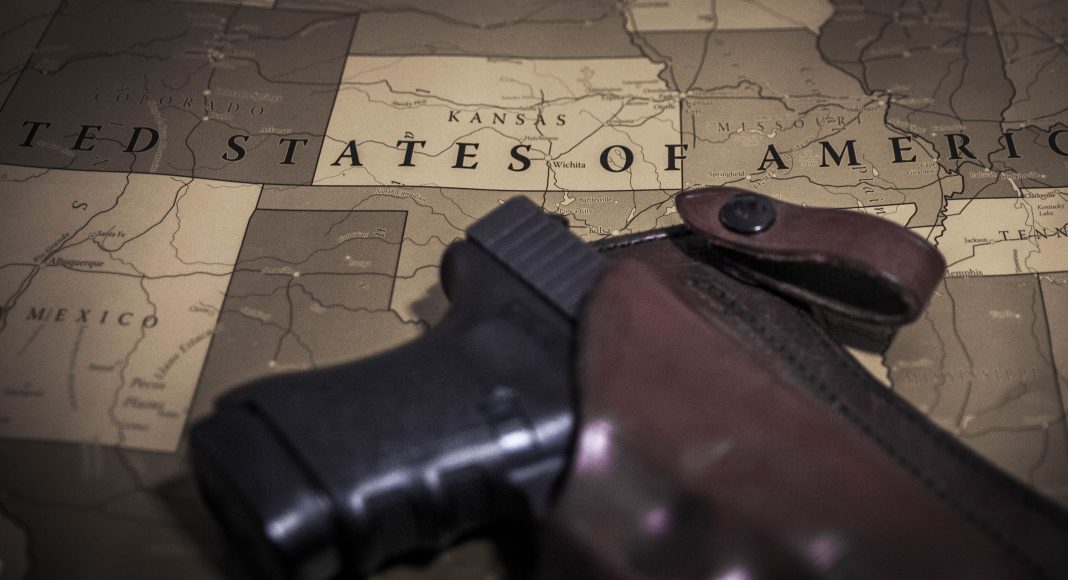 Long Answer: Shortly after the Virginia Tech shooting in 2007, Students for Concealed Carry took an active role in urging the repeal of campus self-defense bans, and has successfully lobbied for changed laws in more than a dozen states.

Rules allowing campus carry are governed by state law. Consequently, regulatory mechanisms and operative law differ by region, and are applied differently. Some colleges only allow guns locked in cars. Some permit concealed carry only on the grounds, but not inside buildings. And of course, some colleges allow carry inside of buildings.

Some colleges have taken action to reduce concealed carry on campus even in states which allow it. For example, despite a court ruling in Oregon revoking statutory bans on campus carry, the education board voted to exclude campus carry from buildings by policy. (According to media reports, students routinely carry anyway.) Most if not all of Wisconsin colleges exercise their legal authority to ban concealed carry inside of buildings.

Tennessee campus carry is confined to faculty and staff only. Conversely, some states including Michigan, Ohio and Virginia allow open carry on college campus property outside of buildings. (SCC does not take an active position on open carry on campus.) Furthermore, there is legal analysis which suggests concealed carry may not be prohibited on campus grounds in Virginia.

Also note that some states require “enhanced permits” which entail additional training before carrying on campus, such as Idaho, Arkansas and Mississippi.

Some states allow guns to be locked in cars on campus, including states in Florida, Georgia, Kentucky, Nebraska, North Carolina, North Dakota, Ohio, South Carolina, and Tennessee. Students for Concealed Carry has successfully helped bring legal challenges to allow guns to be secured in locked cars in both Ohio and Kentucky.

In conclusion, you can see that answering questions about college firearm policy is not as straightforward as it may seem at first. There is nuance even in how the question is phrased (“how many states allow guns on campus” versus “how many states allow concealed carry on campus”). The takeaway should still be that hundreds of colleges in nearly one-fourth of states in the US now allow campus carry in some form, with virtually no resulting increases in crime, shootings or violence.

Students for Concealed Carry has taken an active role in coordination, lobbying, public discourse and where appropriate, legal action to affirm and extend to colleges the rights of self-defense to responsible citizens dually authorized to carry concealed by state agencies. We will continue to work for the decriminalization of self-defense on college campuses.

NOTE:
The preceding is a general estimation of state laws compiled through media accounts, secondhand sources, and primary reading of statutes and interpretive documents such as attorney-general opinions. It is not intended as a form of, or as a substitute for, legal advice. Such advice should always come from competent, licensed counsel. Should the advice of a legal professional contradict this website, counsel’s opinion should control and supersede anything written herein. No attorney client relationship is created or implied by this website.

0
It’s no secret that the world has been upended by COVID-19 and the effects of government response. State legislatures and courts were shuttered, businesses...
Read more
Featured