What The University Star Got Wrong

The Texas State University student newspaper The University Star is catching up to UT-Austin’s Daily Texan in the competition to be the Lone Star State’s least-competent student news publication. To see the article click here; then come back and read this litany of corrections:

The first campus carry bills were filed in the 81st (2009) Texas Legislative Session, not the 82nd (2011), and they were filed by Senator Jeff Wentworth and Rep. Joe Driver, not by Rep. David Simpson, who wasn’t even in the Texas Legislature at that time.

Rep. Driver’s bill (HB 1893) was coauthored by 75 of the House’s 150 Representatives, including several Democrats.

Senator Wentworth’s bill (SB 1164) was coauthored by 14 of the Senate’s 31 Senators, including two prominent Democrats. It passed out of the Senate by a vote of 20 to 11 (four of the 20 were Democrats). However, due to a Democratic “chub” (aka filibuster) of a Republican-backed voter ID bill in the House, Senator Wentworth’s campus carry bill (along with hundreds of other bills that were still pending at the time of the filibuster) never reached the House floor.

In 2011, the primary campus carry bills were SB 354 by Senator Wentworth and HB 750 by Rep. Driver. As a freshman legislator, Rep. Simpson did file his own campus carry bill in 2011, but it was eclipsed by Rep. Driver’s bill, which Rep. Simpson ended up joining as a coauthor. SB 354 was coauthored by 15 of the Senate’s 31 Senators, and HB 750 was coauthored by 88 of the House’s 150 Representatives. Opponents in the Senate were able to use the Senate’s old two-thirds rule to block a floor vote on SB 354 (Sen. Wentworth had only 20 of the 21 votes he needed to reach the two-thirds threshold for a floor vote); however, Senator Wentworth offered the SB 354 language as an amendment to another bill, and that amendment was accepted by a vote of 20-10 (one of the 20 was Senator John Whitmire, a prominent Democrat and the longest-serving member of the Texas Senate). After passing out of the Senate, that bill was killed on a point of order in the House.

In 2013, the primary campus carry bills were SB 182 by Senator Brian Birdwell and HB 972 by Representative Allen Fletcher. SB 182 was coauthored by 14 of the Senate’s 31 Senators, and HB 972 was coauthored by 65 of the House’s 150 Representatives. HB 972 passed out of the House by a vote of 102 to 41; however, opponents in the Senate were again able to use the two-thirds rule to block a floor vote (as in 2011, the sponsor had only 20 of the 21 votes he needed to reach the two-thirds threshold for a floor vote).

During both the 2009 and 2011 Texas Legislative Sessions, campus carry was every bit as hot a topic on Texas college campuses and in the Texas Capitol as it was during the 2015 Texas Legislative Session. House and Senate committee hearings on the bills spilled over into overflow rooms, typically drawing 100-200 witnesses, and sometimes lasted late into the night. During both sessions, the consensus among both sides was that campus carry had a very real chance of passing. Both sides took the legislation very seriously; nobody saw it as a laughing matter.

Campus carry got a little less attention during the 2013 session; however, at the beginning of the 2015 session, pundits across the state noted that, due to Lieutenant Governor-elect Dan Patrick’s promise to do away with the Senate’s traditional two-thirds rule, campus carry had a better chance than ever of passing.

At no point during the 2015 Texas Legislative Session did any lawmaker file or publicly consider an amendment that would have allowed unlicensed persons to carry handguns on college campuses or that would have lowered the age limit from 21 to 18.

As for the article’s many claims about professors and university employees being legally prohibited from speaking out against pending legislation, the only thing Texas law says regarding lobbying by state employees is, “A state agency may not use appropriated money to attempt to influence the passage or defeat of a legislative measure.” To suggest that that one line of text prohibits a university employee from so much as using a university computer to research a proposed law is an absurd claim without sound legal basis.

Anyone who genuinely wants to understand why Students for Concealed Carry supports the legalization of licensed concealed carry on Texas college campuses should visit WhyCampusCarry and spend some time researching SCC’s position.

1
AUSTIN, TEXAS – When Students for Concealed Carry (SCC) was approached last July by a young reporter from Rolling Stone magazine, we were skeptical....
Read more 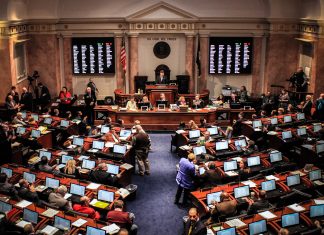 David Burnett - February 4, 2020
0
As legislative assemblies get underway for 2020, six states have announced some form of legislation to repeal bans on defensive concealed carry...