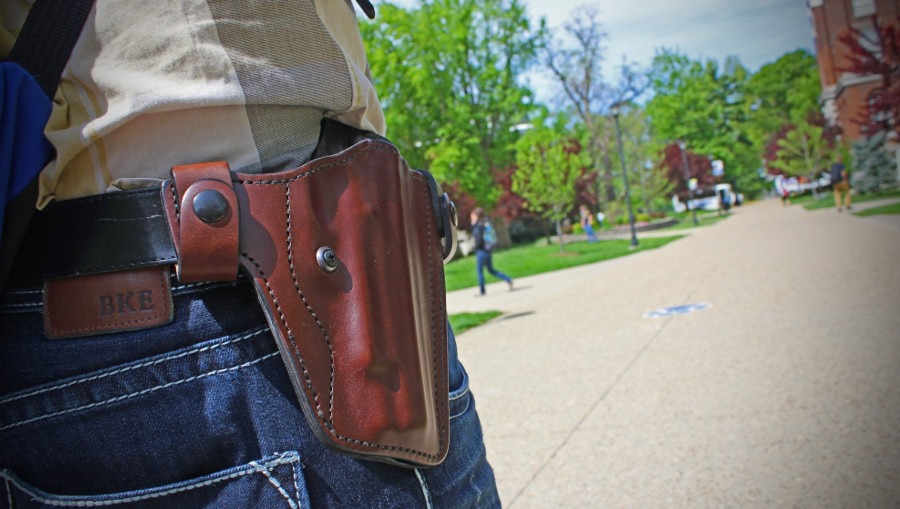 Students for Concealed Carry is once again hosting an Empty Holster Protest to call for decriminalizing licensed concealed carry on college campuses.

The nationwide protest is the group’s signature event to raise awareness for the increased risks that college students face with crime and mass shootings, and the deadly illusion perpetuated by colleges that posting signs will ward off criminals.

“If you have a state-issued permit, the government has approved you to carry a concealed firearm anywhere the law allows, said David Burnett, a spokesman for the group. “Yet when it comes to one of the few places mass shooters favor, universities arbitrarily overrule that trust and forbid responsible citizens from defending themselves if the unthinkable happens.”

“Time and again, these murderous psychopaths have shown a preference for gun free zones because the rules guarantee no one can shoot back,” Burnett added. “Yet instead of developing proactive solutions to prevent shootings, college administrators threaten to ruin our lives with prison time or expulsion if we carry. They won’t be the ones in the classrooms with us when a criminal opens fire.”

The group points to hundreds of campuses in at least ten states which already permit campus carry, due largely to the group’s legislative and lobbying efforts since their formation shortly after the Virginia Tech massacre in 2007. Despite predictions to the contrary, “campus carry” colleges haven’t seen increased crime or shootings. The group notes this is because persons obtaining concealed carry permits must, in most cases, be over 21 to qualify, as well as passing a litany of background checks and qualifications.

“Bottom line, posting signs requiring students to leave their guns at home is a useless and discriminatory, and makes the campus more appealing to criminals. It’s time for colleges to give up the pretense that they can protect us, and let responsible, mature adults choose for themselves.”

The protest, which involves symbolically wearing empty holsters while on campus, is nonviolent and nondisruptive, and will occur October 7th – 11th, 2019.

For more information, visit ConcealedCampus.org or the Facebook event page.